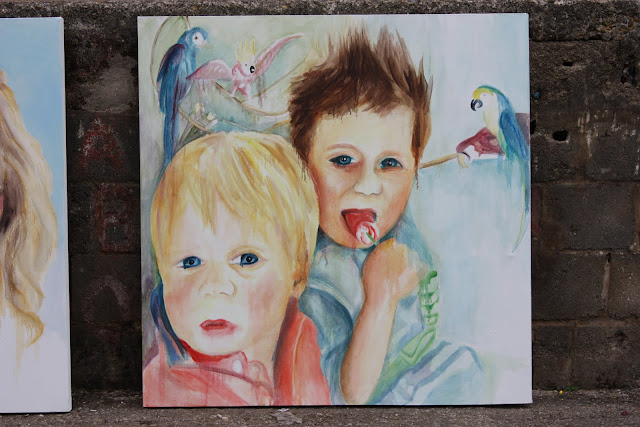 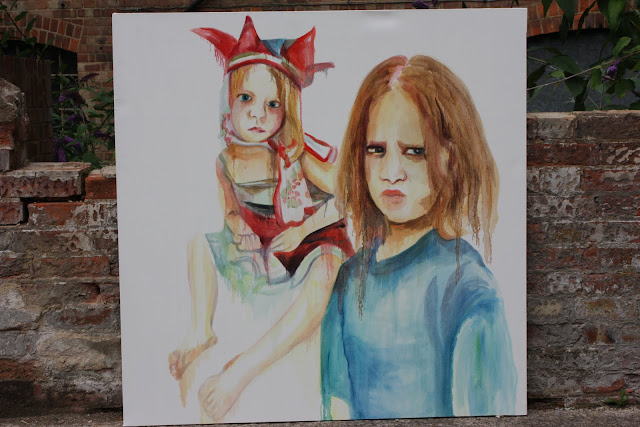 Work in progress exploring dialogue between subjects. This will continue as an investigation alongside my VE essay. Both images are composite, however, the first are related and the second pair are randomly placed. I think that this is evident as they are awkwardly placed together, particularly the 'floating' girl who seems placed out of context. They are also intended to develop as a pair of paintings - both have a diagonal format which creates an arc when they are viewed next to each other. The use of birds in the background of the two boys is intended to give some context, a kind of babes in the wood scenario perhaps. It has been difficult choosing colours for the backgrounds of both as this really affects how the figures in the images look. I was pleased to see that the paintings are not as yellow as I first thought now I have taken them outside of the studio to photograph. They are both beginning to build up in different ways. The first is continuing to be layered with thin washes of oil, diluted with turps; the second has thicker paint in some areas and is more scratchy with outlines. When visitors commented on my work at Open Studios they expected the media to be watercolour not oil due to its lack of gloss. This works for me but I may consider using some sort of varnish or glaze at the end of the process to restore some of the original look of oil. I have also identified an issue with using white paint - it creates a cloudy, almost pastel look to the paint, it seems less pure. I am going to try and preserve some the white from the ground of the canvas to keep some cleaner areas.
Reflection

This process is helping me to explore pairs and surfaces in multiple levels. To work simultaneously on two pairs which could link with each other is quite challenging but healthy as it shares the pressure of achieving success between the two. I intend to spend more time looking at my work outside to gain a true light perspective. This will enable me to make better judgements about colour combinations and the generally balance in the image.
Posted by Unknown at 14:55