Though my search for double portraits and (still) trying to locate my area of focus/interest I have found a few more artists who currently seem relevant to my practise. Although I am loathed to list them here it seems to be the most effective way of evidencing that I am actually processing, researching, contemplating and reflecting on my work. There must be someway of showing this process of collecting and responding to visual imagery without creating a considerable amount more work. I have realised that part of the reason I am struggling with some aspects of the course is that I have never before had to work to a brief whether this was dictating the scale, content or theme of my work.  It has always been through own choice and evidently I need to train myself to be more flexible and respond to a concept - this could also help my communication of key ideas to the audience. So establishing a 'brief' for my practise will be added - somewhere near to the top - of my 'to do' list. I am also still thinking about my feedback, particularly my lack of critical reflection and need to 'edit' my blog. I was very unimpressed at being quoted to support an argument re: the maps which I didn't want to be part of. This has made me wary of writing openly in some instances on my blog. I have never minded that it was public, but to be truly reflective there needs to be an element of trust and for me this is to avoid using my reflection to support someone else's argument, even if it fits their brief. Anyway, I digress from the original objective of this post. It is about painters. I will instinctively migrate towards female photographers as my contemporary reference point but I need to gain a greater understanding of how the mechanics of painting enable the artist to construct and communicate ideas to the audience. I don't like to quote on the blog but this seemed the best way to avoid paraphrasing general information - see key words in green.
David Harrison
'David Harrison is an artist whose love of nature is the primary inspiration for his work. Living in the centre of London where man claims every inch of space for himself, it's hard to imagine a parallel world hidden in its undergrowth where nature adapts as its habitat shrinks, but this invisible world is a cause of wonder which feeds his work.'
http://poodle666.com/index.php
Harrison also makes 3D objects which compliment the natural world in his work, mainly animals, especially owls. I love the randomly placed animals and quite remote setting. 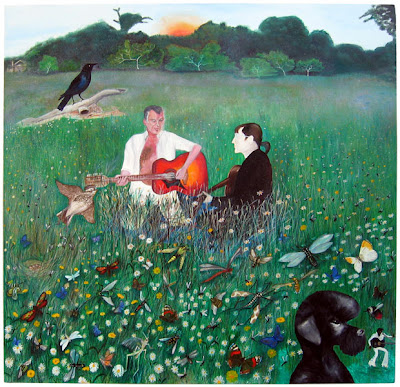 Rather reminds me of Peter Blake's 'Midsummer' and 'Alice' paintings.
http://www.tate.org.uk/liverpool/exhibitions/peterblake/exhibitionguide4.shtm
http://www.rca.ac.uk/Default.aspx?ContentID=503875&GroupID=503863&CategoryID=0&CollectionId=0
The process of collaging is often used by Peter Blake as well as his painted works. Although these two pieces are different, he still plays with scale, the figure and layers referencing play.
http://www.jealousgallery.com/artist.asp?ID=100&F=Top%20artist
Hernan Bas
'The figures in Hernan Bas's paintings are charged with potential. Captured at various thresholds - between youth and adulthood, innocence and experience, public and private realms - and situated within a shifting terrain of interior and exterior spaces that bring to mind poles of intellect and physicality, the androgynous boys in these paintings engage in rituals of courtship, love and death that seem to be based on a theatrical exaggeration of emotion.'
http://www.victoria-miro.com/artists/_3/
'Though recently transplanted to Detroit, Michigan, Hernan Bas is still considered one of South Florida's most celebrated artists and one of its most prolific-turning out many-layered compositions depicting naturalist themes, compelling subjects, and symbolism that is both manifest and mysterious. References to the Romantic poets, the American transcendentalists and mythology appear prominently in his work. His signature inspired landscapes reveal an abiding love for, and faith in the transformative powers of nature. But, Bas's landscapes are as concealing as they are revealing.'
http://snitzer.com/past/forest/index.html
Conceal and reveal...mythology, stories, engaing due to context and layering.
Tim Maguire
http://www.tim-maguire.com/index.html
Stunning plant paintings. Definitely not bad. Digital photographs are used for painting stimuli, introducing an element of trickery as the quality of the paintings is saturated and photographic.

Clearly there is something about the outside environment which interests me. This is a suprise as I have always referenced wallpaper, but only the kind which twists and turns and drags you in. The opportunity for playfulness and hiding are clear. Previously this is something which I have explored through mask and costume. Perhaps I need to try to be more playful with the media and layer up to hide and reveal figures. Referencing literature and myths is an increasing interest, although I must be careful not to do this in a literal way, but more through subverting or suggesting an idea. Animals as symbols, or referencing stories. Scale, again linking to hiding, shrinking or growing, adding to ambiguity. Also the idea of a parallel world, parallel or double persona and androgeny, looking at a hidden lifestyle or fantasy. This is proving to be really hard for me. I am going to attempt to write a brief or statement of intent for my practise and come back to it.