I decided to start the FFF studio task by 'fracturing' a range of images from different sources. Art postcards from my collection, found images from magazines, postcards from my recent visits to the National & Portrait Galleries. By cutting and rearranging the images, I was hoping to explore compositional ideas and create juxtapositions, perhaps building on my brainstorm of how to show concepts through images, by 'forming' them into a whole image. 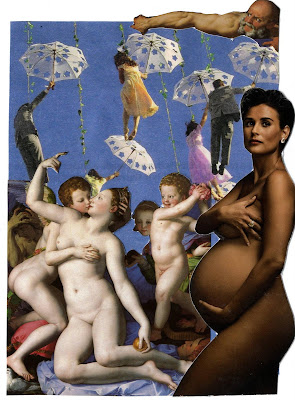 Collage 1: Enjoyed the overall blue appearance of this collage. I brought together the two nude images because of their similar positioning, the hand placed over the breast, the glance cast away from the viewer. The idea of the sky being held up and a series of figures floating away with umbrellas, I felt contributed to the bizarre element to this scene. The depth is something I need to explore, as well as the use of the whole figure. 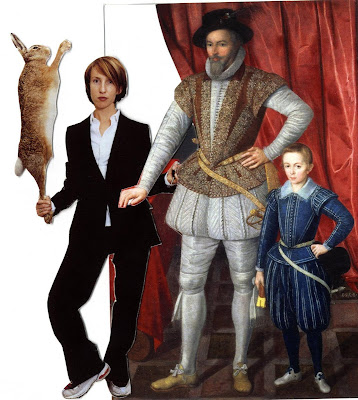 Collage 2: Again, the blue and red colour palette comes through. It just seemed to make sense to pair Sam Taylor-Wood with the other two figures as her jaunty stance seemed to mirror theirs. I also like the way her hare perhaps references the kill you might find in a Tudor kitchen, although those would be likely to hang upside down. 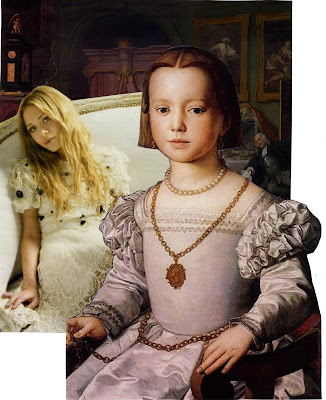 Collage 3: More muted colours in this, the simplicity works for me. The two figures both invite the gaze of the viewer, although the girl in the foreground seems to me more formal, whereas the girl behind could perhaps be playful or hidden in someway. I included a dark voyeur in the background to create a sense of unease. 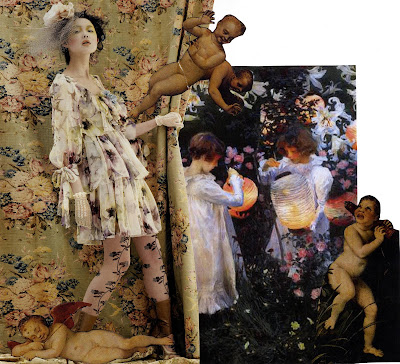 Collage 4: Overall colour in yellow tones seems slightly sickly to me. The use of the curtain in key in this collage, screening another world, creating a facade, suggesting an enhanced sense of looking in. 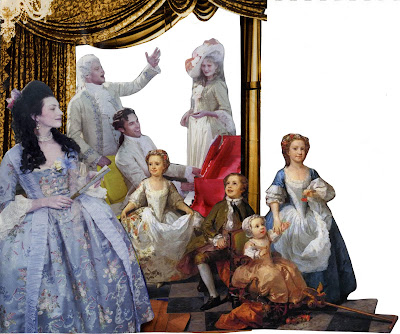 Collage 5: Used the curtain again here but not as a screen. Here I was playing with the idea of scale, the dwarfed children and the imposing adult figures reminded me of Gulliver's Travels. I dislike the overall colour of this, mainly because the left section is made up of an advertising image which appeared bleached and lacked the rich colour of the Hogarth. 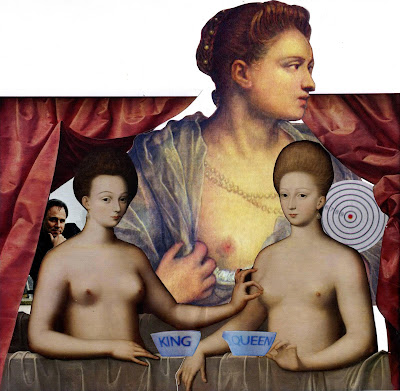 Collage 6: Perhaps the most playful, although I'm not sure that this works well with the out sized figure in  the background. I love the camp in this image, the cheeky nipple tweak and the gender bending king and queen cups. Again I have included a voyeur tucked behind the figures. 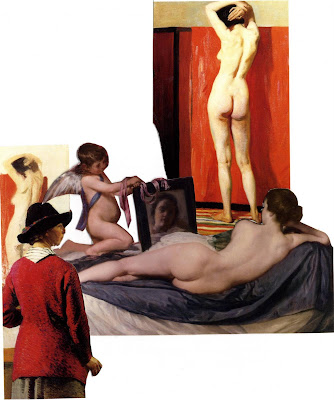 Collage 7: Here I was experimenting with the layering of self reflection. The two nudes both look away but the mirror reflection looks back at the two viewers, us and the woman in the foreground. The fact that one of the original images was a self portrait, I feel creates another layer to the image. The overall red of the image and quantity of flesh seems to work compositionally, and I made a conscious decision not to keep the images within a structured form, instead leaving the awkward angles to create space. 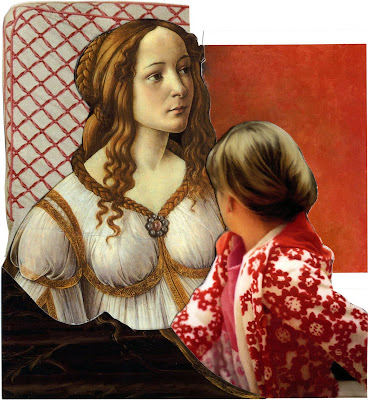 Collage 8: Another red image, Richter's painting (which I also used in the 'Take 2' task) glancing round towards Botticelli's Venus, although neither seem to make eye contact. I like the simplicity of this composite, it also reminds me of Nicky Hoberman's 'Twist'. 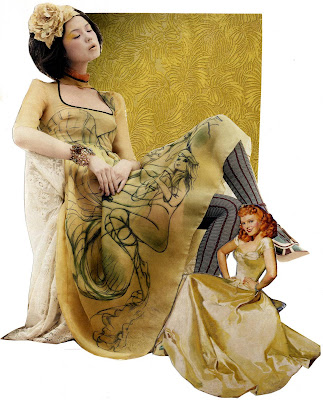 Collage 9: This is a scale experiment, creating a contrast between the two yellow dresses of the women. It doesn't work in composition, but I do rather like the fabric folds. 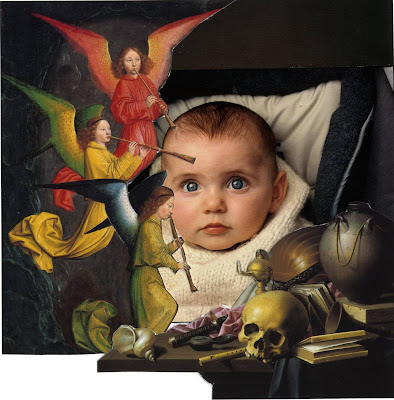 Collage 10: Three piece collage centred around Annie Leibovitz's photograph of her daughter. This experiment was really thinking about the integration of symbols in images as well as use of background and foreground. I think the composition works well and the dark edges contrasting with the light in the baby's face work well.
To further take these composites into my own work and interpretation, as well as fulfilling the 'framing' part of task I decided to use Photoshop to roughly put together some digital composites with found images. 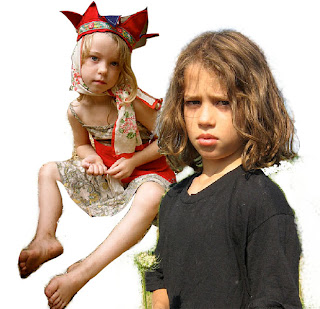 This composite references 'Collage 2' with the seated figures and the direct gaze. I love the floating jester and suspicious look of the child in the foreground. 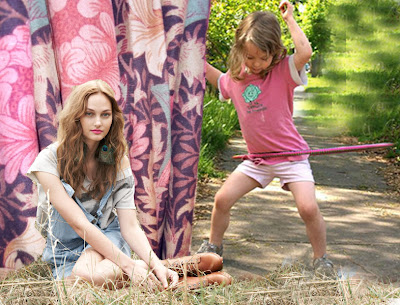 This composite references 'Collage 4' with the use of the curtain to create a sense of looking in on a private activity, and emphasise the sense of foreground and background. The background for me doesn't work due to the severity of the green grass. If I was to take this into paint, I would probably remove the context her and just use a block colour to bring attention back to the figure. 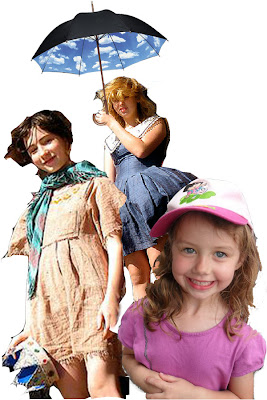 This composite references 'Collage 1' simplifying the raining scene of umbrellas and adding the playful object like the sky umbrella and children's crown. The child in the foreground replacing the nude and looks directly at the viewer rather than averting our gaze. 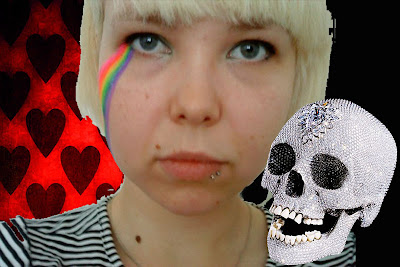 This composite references 'Collage 10', using a larger face in the frame and incorporating Damien Hirst's skull to compliment the black and white t-shirt. I would prefer if this image wasn't cropped across the top. 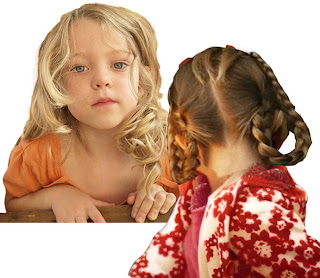 This composite references 'Collage 8' with the two figures facing but not looking at each other. I had to reuse Richter's figure as couldn't find an image with quite the same sense of turning.
As a painter, I felt that I still wanted to bring paint into this task although I have learned from my first task that painting on canvas wasn't necessarily most suitable for working within the restricted time period. I have used acrylic with lots of water on paper, which is fairly new to me. The images are selected from what I consider to be the more successful composites and I feel that they get progressively better as I got used to the material. This is an approach which I will definitely use again as this framing, to create painted plans of potential canvas paintings enabled me to discover aspects which didn't work which I would have normally discovered when I began the canvas work. I am happy with the painting of the face in the first image but the position of objects doesn't work for me. The second image palette I love, and will probably take this into oil. However, the quality of the painting here is varying in quality. I feel that the most successful is the final piece, due to the simplicity of the colours and the painting of the hair. I have reduced Richter's dressing gown to red smudges and have heightened the blue of the eyes to create a focal point. Again this is an image that I would like to scale up on canvas. Each painting took one hour and is based on A3 paper with some tweaks.
Posted by Unknown at 07:12